Martin had been to Corfe in 1838 for the purposes of Poor’s Rate assessment and had mapped the town at that time. It is tempting to believe that this map was the basis for the tithe map but if so it must be a scaled down version. This was a large parish and the detail of the town would have been insufficient for the purposes of the parochial assessment act. Martin had connections with the area having sold estates in the 1820’s but his most important connection was Lord Eldon who had extensive lands in the area and whose lordly seat, “Encombe House, Pleasure Gardens, Ponds and north guile” are all detailed on the map. 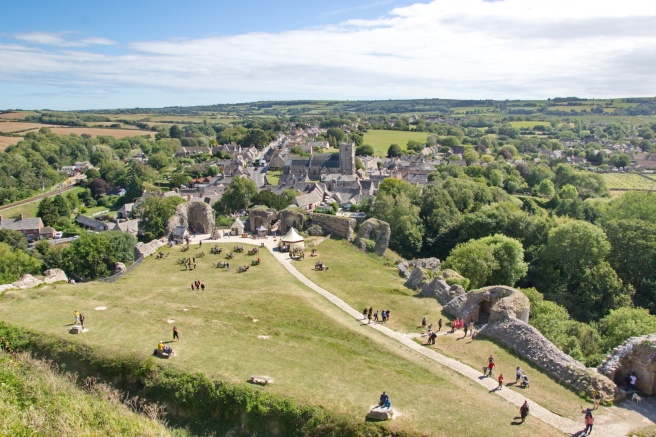 The Classic view of Corfe from the castle.

The map is unique in a number of respects. It is the only one of Martin’s maps with a real, albeit dilapidated castle in it, which he denotes simply as “Ruins”. Totalling some 16 ½ acres it was occupied by Joseph Willis, one time Steward to the Earl of Eldon and was presumably given over to sheep, as indeed it’s outer banks still are today. To the south west is a reminder of the castle’s nemesis in the form ‘Cromwell’s Battery’. Probably built by King Stephen when he besieged the castle, these ancient rings were used by Cromwell’s forces [the great man not attending in person] attacking the castle. In Martin’s day they were amongst the other holdings of Joseph Willis.

Another unusual feature is that there is ‘sea’ at the top and bottom of the map. Admittedly the top of the map is part of Poole Harbour rather than open sea but it is also the only one of his maps to include islands. Plots 589-591 are respectively Long, Round and Green islands. Each was measured but none were cultivated or subject to the tithe.

Less unusually it is one of three Dorset maps that shows a railway track. These were not as yet steam railways, but narrow gauge horse drawn industrial railways. The Corfe map shows the one at Norden, a small part of which is extant crossing the Swanage Railway. This was constructed in 1806 for the China clay industry and the area of the pits is roughly outlined. Stevenson in his Board of Agriculture report was clearly fascinated by this new technology. He noted that the rails were three feet long with a horizontal plate for the wheels to run on and the rail on the side next to the horse path had a vertical edging three inches high to stop the four wheeled carriages being pulled off. Each carriage could hold two tons of china clay and to lay the track new cost £2000 a mile. Almost as expensive as HS2! He noted that “Three horses draw 10 tons to the sea-side, three times a day at a cost of six pence per ton weight.” The railway is also depicted on the Church Knowle [1], map and on the Corfe Map Martin notes it leads to the ‘Middlebere channel’ where there must have been a quay for loading the clay. It’s final destination was Liverpool.

The final railway is on Portland built for the stone industry. Wareham Lady St Mary parish was not commuted by Martin but is of interest as it shows the lands acquired by the London and South-Western railway to build their line to Dorchester. The course of the line is detailed but there is no depiction of the tracks as it had not yet been built.

There are only two diary entries for Corfe both from the 1845 diary. Mr Caines was the other apportioner.

1 One of the few Dorset first class maps as evidenced by the coveted seal.