The powers of the inclosure commissioner were considerable but decisions made by him could still be challenged which was the case in this inclosure. Plush is tiny; it was a ‘tithing’ and the bill to inclose was introduced on 22nd February 1809. Thomas Hardy used the parish in his novel Tess of the d’Urbeville’s when he described it as a “starve acre” place and called it Flintcomb -Ash [see In Depth The Thomas Hardy Connection]. The sole commissioner was William Jennings Jnr. John Martin was not mentioned in any of the notices. Despite its small size the award was not finally enrolled until 1825. The bill begins, “A petition of several owners of estates in the Tything of Plush in the parish of Buckland Newton in the county of Dorset was presented and read setting forth there are in the said Tything several Open Common Arable Fields, Common Downs, Pastures and other Commonable lands which might be improved if inclosed.” A typical opening for such an act.

Kain attributes the Plush map to “? William Jennings” but there are good grounds for thinking this attribution is wrong. There are two entries for the Plush inclosure which indicate Martin was involved in the inclosure. Neither specify he was the surveyor to the award but on the other hand there would have been little reason for him to go to the meeting if he were not the surveyor. [1]

The map was normally made by the surveyor and there is evidence that this was John Martin. It was not common for surveyors to sign inclosure maps and William Jennings did not sign this one . Stylistically though there is little doubt it was drawn by Martin.

The Plush inclosure took an inordinate length of time to complete and from the start there were problems. From the award map we can see that the following allotments were made

It seems incredibly unlikely that the three Miller’s were unrelated but proving links between them is difficult. There were several ‘Michael Miller’s’ in the village at the time . One for example was born in 1791 which would have made him 19 yrs old. But he was the seventh of his family with this name and his father, also Michael, was still alive at the time of the inclosure and probably owned the farm. It is probably this Michael Miller that Henry Kaines noted in 1825

The Diaries of Henry Kaines transcribed by Peter M Shirley.

In the 1841 census Michael Miller is still present in the tithing but he is unlikely to have been the father. In 1841 John Miller was still alive but Robert appears to have died. Whatever the family relations were, the Millers owned 220 acres; the four leaseholders a mere 22 acres. The Millers would have had an overwhelming influence in the parish.

The Michaelmas Quarter Sessions [September] in 1809 notes an appeal had been made against the proposed allotments by Charles Shirt [ or rather his trustees] and Leonard Pount. Neither men can be traced although Pount continued to be subject to the land tax in Plush for another fifteen years. Given the date of the enactment the award appears to have been made remarkably quickly,

They alleged that the allotments,

This was a serious allegation. Commissioners had to be impartial and at first sight there was some justification for the complaint. The common belonged to the lord of the manor and in most manors those who were inclosing probably thought of it as ‘free’ land. In most manors the inclosers did indeed get land on the common and when they didn’t they were probably at a loss to know why.

“2nd That the Rights of Common on the said Down originally belonging to the Said four Leasehold Estates are Under Valued and that in Setting out the new Allottment the whole of the said Downs is Under Valued.”

A worked example [in whole pounds] will give an indication of how the value of the common was allotted.

A right of common allowed an individual to graze a certain number of animals on the waste. Of itself this was of value to the farmer but the farmer did not actually have to graze any animals to make a profit from the right for they could, if they chose, lease the right to someone else. As a result the right of common could vary in value and a bone of contention was that the rights of common of copyholders, for a variety of reasons, was often valued at a lower rate to the freeholders.

Undervaluing their rights of common would have put the leaseholders at an immediate disadvantage as the value of their estates would be reduced. It is not so clear why undervaluing the common itself would have been detrimental as all parties in theory would have been affected. A possible answer is the type of farming that the Millers were engaged in.

Twenty eight years later the parent parish, Buckland Newton [which included Plush] had it’s tithes commuted we find that Michael Miller owns over a thousand acres, of which just one hundred and eighty five acres were arable. The vast majority of the land was meadow and pasture and the Millers were almost certainly dairy farmers. In short it was their interests to obtain as much down and grass land as possible and limit their arable holdings. The same applied to Robert Miller who had two hundred and eighteen acres across the parish of which a mere seventeen acres were arable. Given the huge disparity in the value of the various estates it must surely have been difficult to accommodate the Miller’s claims without giving them large swathes of the downland.

This too was a serious allegation. It implied that the value of the leaseholders original arable land had been under valued. This together with the undervaluation of the rights of common meant that the total value of the leaseholders estates was reduced and then, a second whammy for them, they were allocated land which was over valued. The final charge directly implicated John Martin although not by name.

The surveyor was the person in any inclosure who had most contact with the people in the parish and probably had much wider experience in land valuing than many of those who acted as commissioners. This cannot be said of William Jennings however and the court clearly agreed with him,

It is clear that the leaseholders thought that the allotments were unfair. In the literature that has surrounded inclosures it would appear that disputes over rights of common were frequent. In Dorset they appear to have been rare. Disputes like this one were held at the county quarter sessions and the records from 1810 -1870 [when the last inclosure took place ] show this was the only example. This is hardly surprising since few copyhold or lifeholders had the money to launch an appeal. Moreover the quarter sessions heard plenty of other ‘appeals’; against bastardy, parochial poor rate assessments and the ‘convictions’ by various Justices of the Peace against various individuals on a range of matters. Almost all failed; a fact doubtless known to the various attorneys in the county.

How all of this panned out in the end is not known. Twenty eight years, when the tithe commutation for Buckland Newton was done all four leaseholders or their descendants are still in the parish. By 1838 the Pount estate has reduced from 14.5 acres to half an acre, James Caines has died but his son [?] John had done well for himself his total holding in the parish amounting to 102 acres. Biles and Symes descendants are reduced to about a quarter acre.

The “other persons” was of course John Martin and another record quoted by Gambier [3] made in 1852 demonstrates that John Martin in was surveyor and made the map.

“I John Martin of Evershot in the County of Dorset do solemnly and sincerely declare that I was engaged as the surveyor under an Act made and passed in the forty ninth year of the reign of his Majesty King George 3rd Inclosing the Open Common, Arable fields and Common Down of the tithing of Plush and that in or about the year eighteen hundred and nine the claims of the several proprietors and persons interested in the Open Common, Arable fields and Common Down within the said tithing of Plush were submitted to me as such surveyor as aforesaid by William Jennings of Evershot the Commissioner appointed…And I further say that having now referred to the Map which I made in the said year eighteen hundred and nine ……..and having now referred to my Notes and Memorandum in connection with such may I say that previous to the award of the Said Commissioner being made Michael Miller of Plush aforesaid Esq [now deceased] claims……………..the several claims of Michael Miller James Caines John Miller and Robert Miller hereinbefore mentioned directed me as such surveyor to measure and map the several allotments”

Arguably not as well rendered as Mr Watts’ map of Rampisham the detail is still of interest. Note the way that Martin has highlighted the edges of the farm buildings [black] and for some reason has hatched the dwelling houses [red]. This is not a usual feature of his maps. The hand drawn trees show little variation but it was clearly a sunny day in Plush as all of them have shadows.

A sunny day at Plush near St John Church looking over North HIll. In 1810 this land belonged to John Miller.

Martin quite frequently depicted churches on his tithe map but as these are copyrighted maps I cannot show any of them. Plush is the only inclosure map of his that I have seen which has it’s church shown. In fact it is not a parish church but a chapelry originally attached to Glastonbury Abbey. 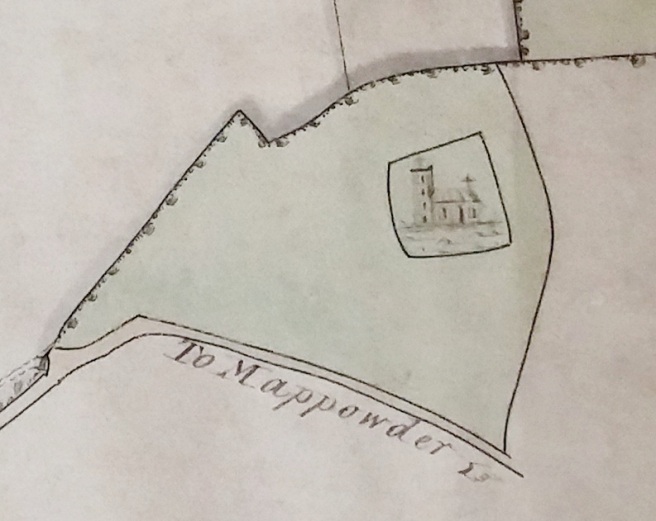 Unfortunately it is not particularly accurate. On the other hand the shading in front of the field is – there is a slight bank at the edge of the church yard.

1 Although what other role he could have played is not obvious.

2 Stephenson W The System of Land Surveying adopted by Surveyors and Commissioners in Old and New Inclosures.

3 Gambier J. Tithes, Tithe Commutation and Agricultural Improvement A Case Study of Dorset circa 1700-1850 Doctoral thesis for University of Exeter held at the Dorset History Centre.