In order to tell his story I have drawn on a number of sources. The most important of these was the Dorset History Centre[ DHC]. Stored here in a carefully controlled environment is the county’s past. Make a request to the friendly staff and the history from centuries ago can be in your hands within minutes.

As well as the diaries, the Martin family archive has provided an eclectic mix of documents to draw on. Only those that are relevant to the story are referred to in the text. In particular I have not examined the numerous, indentures and leases pertaining to his property ownership. To do so would not add greatly, if at all, to the story. Most of the images of the diaries and other documents were taken by me at the DHC after payment of their fee. Some images were created by them [again in exchange for a fee] and where such images have been used this has been indicated.

Secondly must be acknowledged the work done by the three principle genealogy companies: Ancestry, The Genealogist and Find My Past, with its partner, The British Newspaper Archive.

Each has it’s strengths. Ancestry [  https://www.ancestry.co.uk/ ] has a long standing arrangement with Dorset History Centre and together they have digitized huge swathes of data relating to Dorset that simply cannot be found on the other sites. Much of my work on John Martin’s Poor’s [sic] law work was derived from their record set. It is quite simply an invaluable source of stories about the people of Dorset.  If you are a member of Libraries West you can access Ancestry through one of their libraries and it is to their credit that during the Coronavirus crisis of 2020 they allowed members of Libraries West to access them through their home computers. Ancestry has published images of the Dorset tithe maps together with a transcription of the names of the landowners and occupiers. It does not cover other aspects of what was known as tithe commutation. The pictures they have published are of the copy maps that were retained in the parish or sent to the local dioscese. They are in colour and usually the whole map is shown principally because they appear to have survived in better condition than the original maps [retained by the Tithe Commission] and which all too often have had to be cropped.

The Genealogist [ https://www.thegenealogist.co.uk/ ] has published a complete set of the tithe maps which were retained at the tithe commission and are now in the National Archive. These constitute what I call ‘original’ maps and have the virtue of being not confined to Dorset. Whilst a few have been published in colour most are in black and white and have often had to be cropped to preserve them. A recent innovation for this company is the ability to overlay the tithe map on to the modern Ordnance Survey map. This is currently confined to Dorset but adds a new level of fascination to the maps. Many tithe maps were said to contain inaccuracies but this new feature shows that most were in fact highly accurate. This company also publishes images of the written document [the instrument of apportionment] that accompanied the tithe maps and which from a local historian’s point of view are invaluable.

Find My Past [ https://www.findmypast.co.uk/ ] does not publish the tithe maps but has, in addition to the usual genealogical resources, access to the British Newspaper Archive. Reading the newspapers of the time is to immerse oneself in the history of that time, I could spend all day browsing here and I am not alone. Even the great Thomas Hardy trawled the back issues of the Dorset County Chronicle looking for stories he could use in his novels.

You may gain the impression that no one of these organisations ‘does it all’; and you would be right. On more than one occasion I have found data on individuals on one site who were not found on another. I have subscribed to all of these organisations and without them this work would not have been written. In general to avoid copyright issues I have not used any original image material from these sources. I just hope that having parted with a goodly sum of money to each of these companies they will allow me to use my transcriptions.

Next it is necessary to mention the ‘Internet Archive’[1], which hosts a whole range of antiquarian books which are free to download or borrow, the avowed purpose of this organisation being to provide “universal access to all knowledge.” Many, many of those musty volumes, so frequently found in the libraries of ‘stately’ homes with their covers firmly closed, can now be read by anyone with access to the internet. I have used images from some of their books. The books are out of copyright but the images were made by them and I have credited them accordingly. The most important of these in the study of Dorset is Hutchins ‘History and Antiquities of the County of Dorset’;   In Depth :Hutchins The History and Antiquities of the County of Dorset.

There are two unsung heroes in this area, Microsoft and Google, for these two corporations have been responsible for digitizing many of these books. Whether it is just in my area of interest or not I cannot say but most of the books I have referred to come from Google either directly downloaded from their store, or from the Internet Archive. They are free and the work they have done in this area deserves to be applauded. I am not sure how they have made the decision as to what to digitize but I am pleased to see they have resisted the temptation only to digitize what they think will be popular.

Wikipedia of course needs little introduction and it is now difficult to envisage a world where the information it provides did not exist. It is proof, if ever any were needed, that not only is there a thirst for knowledge but an urge amongst those who have that knowledge to see see it more widely disseminated.

Almost all of the sources that I have used to provide background information about the period share important features. They were usually published contemporaneously with events covered in the diaries, or at least shortly after, or they were acknowledged to have been important works in their own times. There are objections to this approach; history it may be said is not simply about facts or events. It is an interpretative process and it may be argued that ‘history’ has moved on since these early writers described events and some form of reinterpretation is needed. To some extent this is inevitable, for if history were ever to be complete there would be no jobs for historians.

My feeling is that whatever the current perspective on a topic, the views of those who were more or less contemporaneous with events, are important and their voices, in their own words should be heard. [2] This period of history suffers because being not so far removed from our own time we feel we understand it and all to often we place our own values onto the past. When 18th and 19th century landowners inclosed their land they often claimed they were doing so in order to increase agricultural production. But they were doing so solely to increase their profits and prevent civil unrest. We should not confuse their motives with those of someone like Norman Borlaug who, in the 1960’s, developed dwarf wheat for humanitarian reasons, in order to prevent starvation.

It is only by listening to those voices from the past that can we begin to have any real insight into that distant world. We not only hear what they say but the tone in which they say it. To our ears their words may seem outdated but it’s what they thought and we have to deal with that. The reader will thus find extensive tracts of original text rendered in “italics” within this work in pursuance of this idea.

This approach works with the technical and official view but fails to express the feelings of those who actually lived in the villages and on the farms. Here there is no better voice than that of Thomas Hardy. An in depth section The Thomas Hardy Connection looks more closely at this. Throughout the text will be found quotations from his work which exemplify the attitudes and feelings of these people.

The desire to use contemporaneous texts is matched with the desire to use contemporaneous images. Here less source material is available. All photographs have been taken by me unless otherwise stated. Photographs taken at the Dorset History Centre were made after payment of a permit fee. There are challenges to photography in these circumstances as quite naturally the history centre does not allow the use of flash nor do they like you standing on the furniture to obtain a better view of the larger documents ! Many of the documents have become curled or inflexible and although weights were provided I did not like to use too many as damage would have resulted. The quality of the pictures is thus somewhat variable.

We have no images of Martin or his extended family. The closest we come is in this respect is Benjamin Jesty, the husband of his wife’s sister Ann whose portrait was painted in connection with his work on small pox. This picture is in the Wellcome Collection and like other portraits included here the picture are credited to the appropriate organisation. Some ‘photographs’ are not hosted on my website but are embedded links to other websites. This too is made clear where it occurs. Some photographs have been extracted from books published in the early 20th century and which are now out of copyright.

If we have few pictures of the people we have few of the countryside either. Some artists produced pictures, including one of the men we shall meet, John Baverstock Knight. The Metropolitan Museum of Art in New York has been useful here as they have an extensive collection of cartoons by Thomas Rowlandson [3], which they have made freely available for use without restriction under the creative commons licence. Rowlandson is best known as a satirist but his work included numerous country scenes, particularly a series known as ‘Outlines of Figures, Landscapes and Cattle…for the Use of Learners’ which are apposite and I have used to illustrate parts of the text. 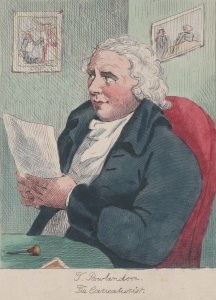 2 In his novel “Lamentation” the author C J Sampson discusses this issue. Of Tudor times he notes that modern historians criticise the work of John Foxe, author of ‘Foxe’s book of Martyrs’ for being biased [which it is] and for being written seventeen years after some of the events. Given that modern historians are writing some five hundred years after the event there is perhaps an irony here.