Hares were widespread in Dorset, surprisingly so when you consider what they had to suffer. Living and breeding on the surface and, being particularly swift when running, they were an obvious animal for hunting.

There are broadly three ways they can be hunted. The first method mentioned in the diaries is beagling. Beagles are scent hounds and were usually followed on foot. Allegedly it was popular with those who had previously sustained injuries falling off their horses . Beagles are expensive animals to keep and the first entry is about the cost . Since he made a similar payment in December 1845 he must have been hunting with them in 1844. It is not certain which pack he hunted with but the most common pack mentioned in the newspapers as hunting in Dorset oddly came Shute House in Devon.

He went out with them irregularly during the year, he went out once in January but in February comes the most concerted run of entries,

Coursing for hares with sight hounds such as greyhounds was the second way of hunting hares and there are numerous entries about this from the 1821 diary onwards. The 1827 diary is the only one where he records buying a game certificate. The price alone, £3 14s 6d was enough to put off the average man but of course the average man would never have been allowed to buy one. They were only available to landowners or their servants such as game keepers. After the 1816 Game Act even snaring a rabbit [or being found with the net to do so] was punishable by transportation. His name appears regularly in the game lists, which had to be published each year but this is the sole entry in the diaries referring to it. Likewise after 1832 there are no further references to coursing in the diaries until 1861.

1861 has the most entries related to coursing when he went out nine times with his dogs catching twenty three hares.He was not averse to lending his dogs out, when he himself could not go, he was after all 81 yr’s old at the time. 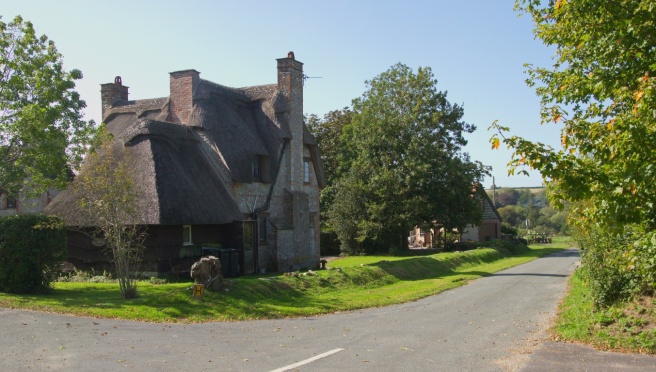 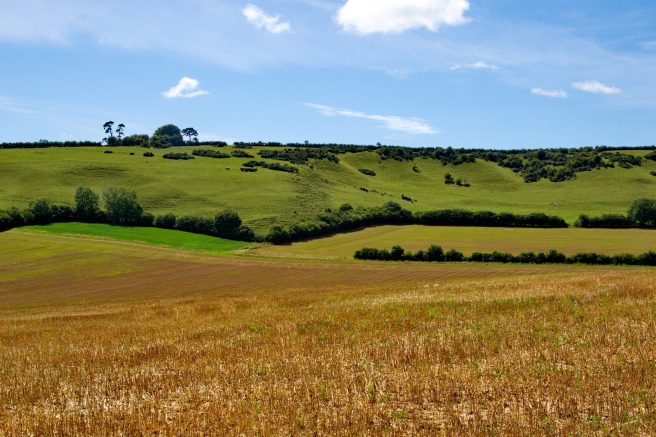 THe downs above Sydling St Nicholas. Roman centurions once marched along the ridge in the distance.

The final method of hunting for hares was on horseback. This seems somewhat unsporting given the difference in size and stamina of the animals and there is no evidence Martin ever actually went hunting on horse back. 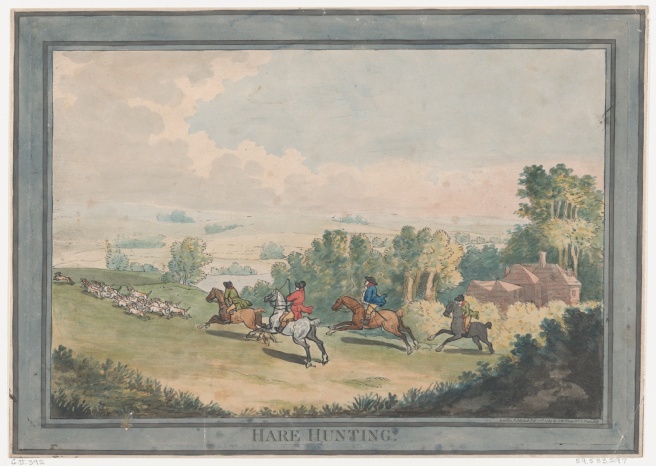 Hares have frequently been the subject of myth and folklore and in Dorset, allegedly a highly superstitious county had it’s own beliefs. It was widely believed that witches often took the form of hares and haunted the hills and downs of the county. They could only be seen at dead of night , rather inconveniently , for the only way of killing them was with a silver bullet. It was this belief that led them to regard hare meat as unlucky. John Udal in his book on Dorsetshire Fole lore quotes a letter sent to him in 1891 relating the story of a labourer in the Isle of Purbeck who noticed a hare waiting for him each evening by a stile. Fearing it was a witch he borrrowed a gun and put a silver sixpence over the charge. On his way home one night he shot the hare and threw his sickle after it wounding it but could not catch it :

“ When he got home a neighbour said to him : ‘Old Nanny’s a dying and wants to see thee.’ ‘Shure! Do she now?” ‘Ees [yes] and she’s got a cut all across her back as if some one had cut it with a sickle.’”

On another occasion a huntsman in the Vale of Blackmoor lost the hare and coming upon a cottage dismounted and asked a fellow huntsman to hold his horse. He entered the cottage and on leaving was reported as saying

“Ah! I knowed how it were. There she sits by the fire pantin’, mud up to her knees’.

Interestingly the parish of Leigh was allegedly a favourite meeting place for witches as well as being popular with the beagles.

One final custom that we should be grateful has died out is the cure for a restless baby. The standard treatment throughout Dorset and parts of Devon were hare’s brains fed to it. If hare’s brains were not available, rabbit brains would do or at a pinch calves brains. It appears that no cooking was involved!